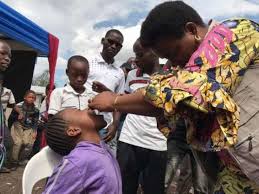 As Nigeria joins the rest of the world to mark the 2021 World Polio Day, medical experts have expressed worry about the outbreak of a vaccine-derived poliovirus also known as CVDPV2  in 22 states of the country.

They said CVDPV2 could mutate and take the form of the wild poliovirus.

But some medical experts, including a professor of medical virology at the University of Maiduguri, Marcycelin Baba, told our correspondent that the CVDPV2, which is a variant of the poliovirus, could mutate into the wild poliovirus thereby leading to severe outbreaks.

Baba said, “The vaccine-derived poliovirus has mutated so much and has the capacity of causing paralysis just like wild polio because, among the three stereotypes of polio, Type 2 is genetically so unstable and mutates very fast. It is under control right now because the Centre for Disease Control (and Prevention) has produced NOPV2 vaccine for emergency use, so with the response, vaccination of children with the NOPV2 will fill that gap.

“But if we do not resume routine immunisation, before you know it, we would have an outbreak and be in a whole lot of trouble once again and our polio-free status would be threatened.”

A professor of public health, Clara Ejembi, in a separate interview with our correspondent also agreed with Baba.

Ejembi, however, advised the Federal Government to speed up routine immunisation.

She said, “The first strategy for polio eradication is to have a strong immunisation programme such that 80 per cent of children are immunised as and when due. Viruses change, this is called mutation. This is why we need to ramp up our immunisation. The NPHCDA should mount an outbreak response and go on immunisation campaigns, and in addition, give the inactivated polio vaccine. This is used in outbreak response.”

Lack Of Early Morning Erection Could Be Sign Of Erectile Dysfunction, Urologists Warn

Why Women Experiencing Painful Sexual Intercourse Should Be Worried’