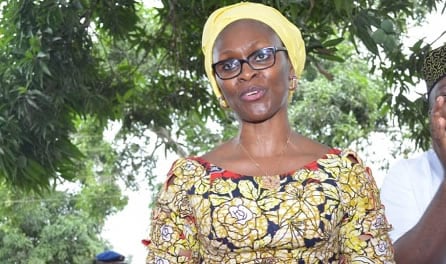 The wife of Ogun State Governor, Mrs Bamidele Abiodun on Thursday, canvassed that efforts must be put in place to employ more nurses and midwives to reduce maternal mortality in the State.

The Governor’s wife said this at the town hall meeting organised by Community Development Association and Ogun Women on Maternal Health and Frontline Workers held in Abeokuta, the State capital.

She called on all stakeholders to come together to help improve the healthcare delivery system in rural areas.

According to her, there is a need to give a level playing field for women in the rural areas in regards to maternal health.

She said, “We need to put more efforts into employing more nurses and midwives to reduce maternal mortality in the state. Improving the state of maternal health in the rural areas in Ogun State will require the involvement of all of us.

“We need to give everybody an equal opportunity, we need to give a level playing field for these women, they are just like us, but vulnerable because of circumstances, it could be any one of us. It is inherent in every society that midwives are present and in abundance but in Ogun, we have a rapid decline.

Abiodun added, “We should encourage our children to go to the school of nursing. By the grace of God, I will speak to the Commissioner for Health to do something, she is a woman and she is also passionate about anything that concerns the women, I will also speak to the Governor to do something about employing women.

Earlier, the President, National Association of Nigeria Nurses and Midwives, Micheal Nnachi had advised the State government to give automatic employment to graduates from the State-owned College of Nursing and Midwifery.

Nnachi said the gesture would help the state solve its current shortage of nursing staff.

The National President whose speech was read by the State chairman of the association, Roseline Solarin said that Ogun State which has about three Universities and five colleges of Nursing shouldn’t be lacking nurses.

He said attributed the shortage of nurses as one of the causes of increased maternal mortality in the state, especially in the rural Community.

How I Control My Blood Sugar With Diet, Medication –87-Year-Old Man Who Has Lived With Diabetes For Almost 50 Years

Nigeria, Others To Get Malaria Vaccine By First Quarter Of 2022 –AHM

We’re Doing Our Best… It’s Not Easy To Tackle Insecurity –...